WHAT IS FIBROMYALGIA AND WHAT DOES CHIROPRACTIC HAVE TO DO WITH IT?

A common question we are asked is, “What is fibromyalgia?” And when we discover what it is — WHAT, if anything, can be done about it? 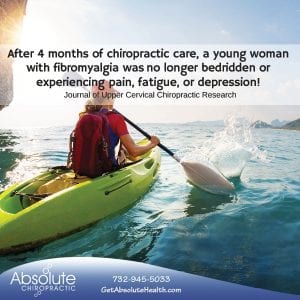 In fact, she demonstrated restoration of her atlas vertebra angle and cervical curve showed during a 90 day follow-up examination!

Atlas misalignment causes distorted activity of the brain’s neurons, which causes widespread activation of the brain stem and cerebral cortex. This is a commonly accepted theory of Fibromyalgia.  Specific chiropractic adjustments can relieve mechanical pressure and improve atlas alignment, which can improve the state of well-being in fibromyalgia patients. Chiropractic adjustments reduce neurological irritation, improving dysfunction of the brain’s processing pathways!

CAN THAT WHIPLASH FROM YEARS AGO BE THE CAUSE OF YOUR MULTIPLE SCLEROSIS SYMPTOMS? YOU ARE PERFECT!

NO BETTER WAY TO START THE DAY THAN WITH AN OPTIMALLY FUNCTIONING NERVOUS SYSTEM! IF YOU WANT TO GET YOURS CHECKED CHECK OUT GETABSOLUTEHEALTH.COM/WE-CAN-HELP

GETTING ADJUSTED FOR THE HEALTH OF IT! THIS GUY HAS BEEN GETTING CHECKED IN OUR OFFICE FOR OVER A YEAR NOW! WHY? SURE, HE HAD A SYMPTOM OR TWO WHEN HE WALKED IN THE DOOR…. BUT NOW — HE COMES …

NEW CAR SEAT HACK EVERY MOM AND DAD SHOULD KNOW. PROTECT THE PARENTS! — TO LEARN MORE ABOUT HOW WE CAN HELP FAMILY HEALTH NATURALLY CHECK OUT GETABSOLUTEHEALTH.COM/WE-CAN-HELP